Can your Yoga Mat be Telling You Something??? 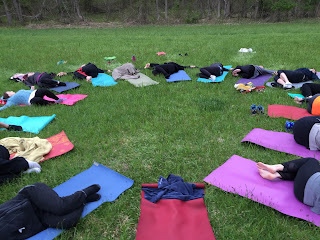 When I first started doing yoga, tapas mats came in two basic colors: purple or blue. Today you can get your mat in just about any color or design that you want to. The various styles allow us to express ourselves just like choosing what outfit you will wear each day. You probably wind up choosing a yoga mat because you are drawn to a certain color or pattern. Of course that sounds most likely. But I started thinking a bit more about this on Wednesday when I decided that it was time to choose a new mat for myself. And I started to realize, that just like anything else, there was, perhaps, a deeper meaning to the color mat that we choose.

My first yoga mat was purple. I didn't chose it, it was a gift from my first yoga teacher for the holidays. As I said, back then there were two options: blue or purple. Lots of girls used purple. Had I had the choice, I may have chosen blue. In fact, my second yoga mat and the first one that I purchased for myself, was blue.

Purple is the color of the 7th Chakra. It represents a connection to spirit, the higher self and consciousness. When I first started yoga, I was a real mess. My body was a mess and my life was a mess. I had a negative outlook on life and a void of spiritual connectedness. It was because of my yoga practice that my life started to turn around. I started to feel better physically, mentally, and I began a relationship with spirit for the first time in my life. My purple yoga mat served me well!

My next yoga mat was dark blue - the second available color for basic yoga tapas mats. Dark blue could indicate a connection to the 6th of 5th chakras. The 6th chakra is represented by the color indigo, which is a deep blueish purple color, while the 5th chakra is a light blue color. The 6th chakra represents intuition, insight and psychic awareness. The 5th chakra represents creativity, speech, and communication of one's truth. Well, at this time in my life I had changed many things. I had finished my massage therapist certification and my 500 hour yoga teacher certification. I had left my primary job of 12 years and the whole corporate world and was beginning to teach yoga and do massages as my primary source of income. I had severed ties with an old relationship and many people from my past that kept me in that negative place. But I still had so much to learn. Prior to teacher training, I really had a weak voice. Forget about communicating my true self, I had a hard time talking about anything important to anyone. I started to forge a new path for myself, guided by what had to be intuition, because not many of my family or close friends at the time understood what I was doing or how I could leave a corporate job with "security" for the unknown. But I did and the business was growing - fast.

My yoga practice was also developing beyond gentle and hatha yoga. I had acquired an interest in vinyasa and power vinyasa. Took some trainings with Baron Baptiste and Shiva Rea. I remember doing my first intense week training with Baron Baptiste on my blue mat and sweating so much that each day when I unrolled my mat, it smelled like my sweat from the previous day. My "jumps" forward and back were pretty poor. So I was kicking divots into it with my toenails each time I came forward. It was a royal mess! I realized that I needed a better mat and someone at the training recommended the jade, natural rubber mats. So when I returned home I purchased my first jade mat in green.

Green is the color of the 4th chakra. It represents love, compassion and balance. I had never been a very active person prior to yoga. I have a compression fracture in my spine from a car accident when I was 16, but even before that it was rare that you would find me doing anything physical. I was the one tanning by the pool instead of playing in it. I was the "jail tag jail keeper" instead of running and chasing. I read books in my room instead of playing outside. Vinyasa yoga created a muscular physique that I was more shocked than anyone else to receive. I didn't even know I had muscles! As I began to balance my physical body with strength as well as flexibility, and balance my mind and emotional centers, my heart started to open too. I remember always writing "LUV" at the bottom of a birthday card because the word "LOVE" felt so foreign to me. I had fights with friends about not wanting to use the word love because I didn't believe in it. And my running joke was that I would have children as soon as you could order them exactly how you wanted them from a catalog. For a very long time, I didn't think that I was worthy of love or that anyone would ever love me. It was during the time of my green yoga mat that I married my husband and became a step-mother to his two girls.

The 3rd chakra represents strength, vitality and will and is the color yellow. I have to admit, I have never owned a yellow mat. I have to further admit that this is my least energized chakra on a whole. I am so much more aligned with personal strength and power than I have ever been. But I still have doubts and my M.O. is to rest on the couch instead of exercise or doing yoga. For a very long time you couldn't even find a yellow mat. But they are out there now. I even thought about getting one recently, then decided that it would probably only get too dirty too fast...hmm, another excuse, perhaps?

My next yoga mat was red. That is the color of the 1st chakra, which is all about survival, security and grounding. During the time when I used my red mat the yoga studio thrived, I felt very grounded, secure and connected to my students and my family and friends. All of my basic needs were being met and I felt very good and strong. This was a great period of growth for me. But it was kind of like the 80's where I enjoyed that abundance a little too much, and then when the energy shifted (as did the color of my mat, I was thrown way off balance).

Ah, the 2nd chakra. Gotta love the 2nd chakra. This center represents our emotional realm, sexuality and relationships. This is the color orange - the color of my next yoga mat...Two of my closest friends passed away very suddenly under its reign. My marriage was having many troubles. I started to realize that some the people around me who I thought were my friends, actually had their own agendas in mind...and they were not really friends of mine at all. To say that I was highly emotional during this era is an understatement. This orange mat saw 5 years of upheaval in my life both personally and professionally. I kept telling myself that I needed to work on my 2nd chakra and the mat color was going to help that too. "Just keep working on stabilizing this energy," I told myself. Then I had to close the 2nd yoga studio in Ewing and I almost lost the yoga studio in East Windsor in the process. I was questioning what I was doing and who I was surrounding myself with. I felt lost in a sea of overwhelming emotions.

The good news is that the energy did start to shift and settle. I did start to realign with myself and my desires. I got rid of A LOT of unwanted energy and made some space for the good stuff to come back in. It started to feel really good. And my orange yoga mat was starting to look old, dirty and ratty. Time for a change!

Things brings me up to this past week. I had been thinking about changing my yoga mat ever since the energy had started to shift - which has been quite a while actually. And I had started to think about what color I wanted. I still wasn't sure. I thought light blue because I never had that color mat. I love to write and would like to work on a book idea that I have. Maybe this color would serve me and my 5th chakra well and enhance my creative juices? I thought about purchasing that yellow mat...then decided against it. Too bold and not the energy I'm looking for right now. Things are finally starting to gel again and the last thing I want is too much ego peaking its ugly head! I thought about getting another green mat. Why not? Love is a great thing. I can always use some more love in my life.

I was getting ready to teach class and I said to a student, "I think I'll grab a new mat today." And I walked over to the bin of mats for sale. I looked in and grabbed a purple mat and ripped off the tags. Last week at our summer mala making workshop I said I wanted to enhance my intuition and grow my psychic awareness, which is 6th and 7th chakra energy. I chose amethyst stones for my mala necklace. They are the color purple and increases positive spiritual energy, clears and cleans the air and life force, and is used for meditation and healing. Healers wear amethyst when doing any healing work. Last week my teacher training group also gave me an amethyst cluster necklace. I've been wearing purple streaks in my hair for months now. So, yes, purple was calling me.

So, as I finish up this blog I begin to wonder if I chose the mat color based on where I am at a certain stage of my life, or if the mat I chose helps promote certain energies in my life? Maybe a little of both. We all have choices to make in life. What color is your yoga mat? Maybe it is time for a change! Choose wisely!!!