Letting Go - a Path of Clearing & Releasing for your Soul's Good

"Letting Go" is something that we hear all the time in yoga. Our teachers will say things like, "Let go of your day," "Let go of your ego," "Let go of the thoughts," etc. Whatever our teachers tells us to let go of, we immediately realize that we are holding on to so many more things. Then the challenge becomes, well, letting it go!

2015 came in as a year of change and releasing. How do I know this? Well let's say that it is a mix of celestial events, energy shifts, and the like. I read early on that 2015 was going to be a year of releasing souls that we not ready or healthy enough to take on the master shifts happening around the planet, enlightening consciousness. The 11:11 phenomena is one such nod to this energy. Those who see these numbers often are (some say) receiving a cosmic download to help increase these energies. Those who think that it's all a bunch of malarkey, well, you can guess where their energy is.

2015 has so far lived up to it's hype. I hear from so many people the struggles that they or family members are enduring with health, finances and relationships. Sure, these struggles have always existed, but not to the extent in which we have seen them this year, right? Illnesses on the rise, global financial crisis, and just that general essence of people losing their minds at alarming rates. Yup, 2015 has been tough. But it has been giving us a gift. If you missed it, look again.

What needs to go in your life? What is it that is not serving your soul's purpose? What are you struggling with? Because if you are struggling somewhere, the Universe is giving you some huge knocks on the head to take a look at something and make some changes. And when we refuse to, then what happens is the Universe makes them for us...and this is usually the least convenient method.

With the recent heath issue and subsequent passing of my Grandmother, shifts of energy are occurring in my family that have been stagnated for so long. Good shifts. Sure, we miss Grandmom and it is still a challenge going through that grief, but things needed to move. And they are starting to.

I realized the other day that this October was going to be seven years since one of my best friends suddenly died. That death started a seven year crisis for me - in body, mind and spirit. I started holding onto extra weight, my back started bothering me again, the grinding of my teeth became full on tension overnight, my mind was not at peace, and I lost my connection to spirit in many ways. I would say that my yoga practice is what kept me going, but in truth, I let that go too, saying that I just didn't have the time for it - like I didn't have the time at home to burn some incense and a candle and pray or meditate. In reality, I had just lost myself. 2015 began with some professional and personal changes that allowed me to start to regain a sense of myself, and this year started out actually feeling very good for me in many ways because I was seeing my true self again and getting in touch with her, and that made me feel quite comfortable and happy. Peaceful? Well, I am working on that.

When Grandmom died in August, I held a huge releasing bonfire for her. I tossed in old papers, medical records, x-rays, a pillow she used under her polio leg, and many more things that we wanted to release. But I didn't stop there. I drug out a box of old journals that also contained letters from various people - and I burned them all - to release my past. 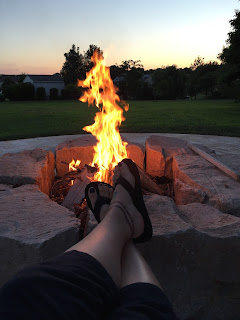 Yesterday I went around my house collecting old paintings, furniture, and small items that I have no use for. I plan to take them to the auction house for sale. If they do not sell, they will throw them out. If I make $20 okay, if not, no worries. They will be gone and not taking up space in my basement.

Last night I held another bonfire. This time I pulled out more personal items that I wanted to release, including proofs with mistakes from my three self-published books, and an old scrapbook containing misc. tickets, pamphlets, dried roses, and numerous cutouts of the boys I crushed on from "Tiger Beat" magazine. I tossed in one of Grandmom's dresses, some old magazines I was holding onto because of the person on the cover, and even forced my husband to throw in some old Fortune magazines that were 12 years old (that was a tough one for him, so he decided to recycle the rest).

I woke up this morning feeling lighter.

I am charged up and on a path. There is still so much more to let go of, but I really want to now. I felt the need to hold onto things before: friends who hurt me whether they meant to or not, FB "friends" who I either really do not know or do not care for seeing their negative posts anymore, old emails sitting in folders that I haven't looked at in ten years, clothing and personal items that I haven't used in five or more years, junk collecting on shelves because I should save the box or I may want it some time, and so much more.

With each layer that I shed, the more I want to shed and the lighter I feel in body, mind and spirit!

My belly is smaller. My eyesight a tad better. My home a little roomier. And my life a little calmer.

I am not done, however. This is just the start. As I eagerly anticipate my journey to Peru & Bolivia next week, I know that this energy that I just released will allow me the space to find out more about myself and to heal some old wounds and clear energy that I have been holding onto for far too long.

So I urge you to take a look at your own life. Where you struggle, there is something to release. Letting go is not easy and sometimes comes with some aches and pains, but it is a necessary thing to do - or, the Universe will do it for you. Why not take on the responsibility for your own happiness?

Blessings of peace as you release with love and light.
Tracey
Posted by Tracey L. Ulshafer at 11:14 AM No comments: