A Shared Ancient Mudra and Why it is Relevant Today

I am certainly not the first to discover the similarities around the world of various stone carvings with hands in the same symbolic gesture that we refer to in yoga as "mudras." This is on my mind today for some reason, however, so I am urged to share this with the community. I can't question why these things arise as they do, so I just go with it. Usually there is a reason we need to understand.

This is me with a hand carved statue of the great Moai of Rapa Nui (Easter Island). The trip here changed my life in ways that I am still processing. These Silent Watchers that sit around the island, facing inward and gazing towards the sky, hold many secrets. Many of the Moai are badly weathered so the carvings are difficult to make out. Most of the really good ones can be found pillaged in museums in London, the US and around the world. Perhaps you can zoom in to see the hand positions here on the Moai, because I think this little carving shows it very well. Sitting just below the naval center, the hands just about touch on the stomach.

The next picture is of one of the actual Moai. Even if you cannot see, trust me that the hand positions are the same.

Oddly enough this was not the first time that I came across this same hand position. In 2015 I visited an ancient site in Bolivia known as Tiwanaku, still an active archeological site.

See the picture below that I have attached from that site and that trip. This is a much clearer picture of the hand position around the naval center. Between these two places: Rapa Nui, located in the middle of the Pacific Ocean, and Bolivia, on the South American continent, we are talking of a distance of about 4,800 km. As for the timeframe of the creation of these stone figures, there is much debate. However, it is generally accepted by most archeologists today that the Moai most likely were carved from the volcanic rock there around 1100 AD, while Tiwanaku reins slightly older at 110 AD (interesting numbers, but that is another story - and by the way, they're really much, much older, but many of us are waiting for the science to catch up).

OK, so some people may think that this distance is a little close and that the stone figures could have been created by the same people. So, let's look at a few others. While several similar figures were found scattered around Mexico throughout the Toltec, Aztec and Huastec peoples, Central America is still relatively in close proximity, so I will leave those pictures out, although you can easily google them on your own.

To look at some really interesting figures, let's go across the Atlantic (and further) to two other locations: Indonesia and Turkey.

As recent as 1996, the ancient city of Gobekli Tepe has been an active archeological site in Turkey, even though it was discovered around 1963. This site is blowing the socks off of many archeologists since the datings are coming back anywhere between 7370-9130 BC - yes, you heard me - BC. That makes Gobekli Tepe approximately 11,000 years old...conservatively. Some scholars argue that it is actually quite older and the work is still being done to prove this timeline. Although I have not had the pleasure to travel to or witness Gobekli Tepe first hand, I was astounded to discover the ancient carvings there. Check out the next one...

Okay, Turkey not far enough away? Let's head out further...how about the Bada Valley in Indonesia?

Here, strewn across the inner landscape are similar carvings dated around the 14th century, or roughly 1300's time period - AD.

See the similar figures in the image below...

As a natural detective, I like putting puzzle pieces together. I may have been Sherlock Holmes in another life. As a yoga teacher, I find this absolutely thrilling. I have taught the science behind mudras, the gestures we make, often of the hands for over twenty years. For the first fifteen years my understanding of Mudras was limited to the Hindu mudras of yoga that I was taught. However, on my trips to Peru, Bolivia, Easter Island, and other such places, I have discovered this world of other mudras that speak to the commonality of ancient beings and a particular shared energy. And this is where it gets really interesting... 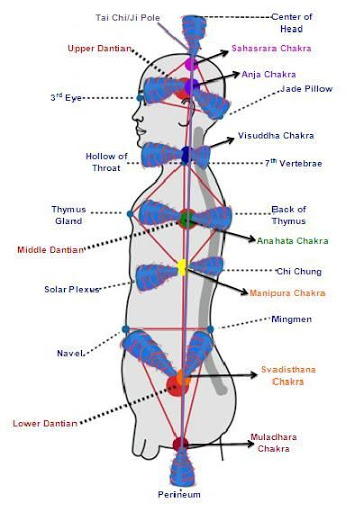 The area about two inches below the naval is known in Chinese medicine as the Lower Dantien. This roughly translates to "elixir field" or "sea of qi." In Chinese medicine qi is the equivalent of prana for yogis - it is the life energy. For Chinese practitioners, the Dantien is the core energy center of the body, a storehouse of energy. If you study Tai Chi, Qi Gong, Martial Arts, Acupuncture, or any other Chinese medicine or practice, the Dantien is an integral factor in your modality. It is the place that all practitioners begin and end. It is the source. Many yogis equate this area with a chakra, a vortex of energy, while Chinese practitioners argue that they cannot be equated. For me, this is the Swadisthana chakra, the second chakra, the source of creation, and I allow that connection to be made.

When I studied Shiatsu, we began the session with our hands on the client's lower Dantien, we called the "Hara." Back then I did not understand this necessary evaluation tool. When I began to teach yoga, I was taught a Belly Breathing technique. I was told that this was a necessary breathing tool, although it was not stressed any more than any of the other breathing techniques that we studied known as pranayama. For some reason, several years ago I found myself focusing teaching students the belly breathing. And the mudra position of hands on the lower Dantien or with the right hand on the heart and the left hand on the abdomen have become quite instinctive for me when instructing. 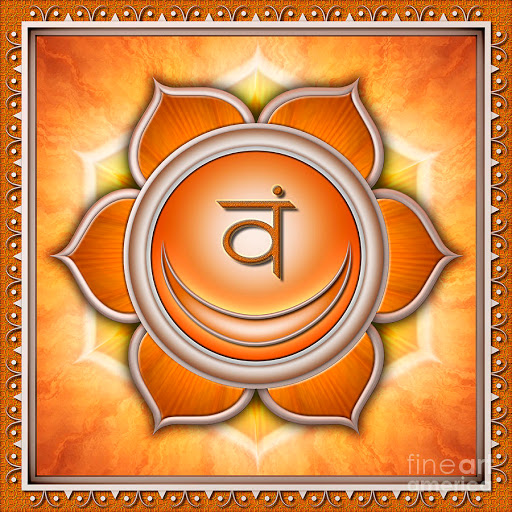 When a practitioner places his or her hands on the this area and focuses on deep breathing, there is a strong connection to one's individual's life force energy, but also to the deeper interconnectedness of all life energy.

Why had the ancient ones made a connection to this area all around the world at various times on our planet? There is still no complete theory on why that I have heard. However, I think it is not too far off to understand the connection to this vital life center and the greater, cosmic understanding of Oneness.

In the year 2020, we find ourselves in an era of mass awakening of consciousness, a time when many old and antiquated ways are moving out and the lower vibrational energies on the planet are all bubbling to the surface for our recognition and elimination. This is a time period of ascension - a collective rising of energy. Spiritualists and scientists agree that the earth has gone through many stages - we just all call it different things. And although life as we know it is changing, there is always a reserve of life energy within us to draw upon and to help us see to the truth. The ancient stone carvings depict beings holding onto this area. We can do this today as well. Connect to life - connect to Oneness - breathe in this ancient mudra and know that all is well.

It is a daily practice of mine and I hope that you share in my enthusiasm.

In love, service and wisdom,

Posted by Tracey L. Ulshafer at 6:46 PM No comments: