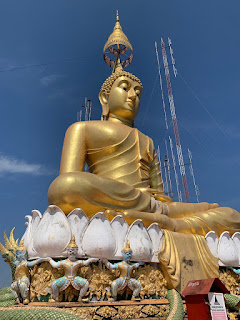 This is the giant Buddha at the top of Tiger Cave Temple Mountain in Krabi Province, Thailand. In order to see this breathtaking Buddha and his view, one must ascend 309 meters, vertically, along a 600 meter path comprised of some 1,260 steps.

I went here with full intentions of making it to the top. I knew that it would be difficult. I had read some of the comments on Trip Advisor from younger visitors who had a hard time, so I was not in denial. I also knew that I was dealing with inflammation and a little extra weight, so if those youngsters were having issues, I would, no doubt, also have some.

I went to Tiger Cave thinking positive. I started by looking around the base temple. There is a lot to see just there. The steps leading up to the top are not front and center, so it took me some time to actually figure out where to ascend. But once I did...there was no doubt about it. 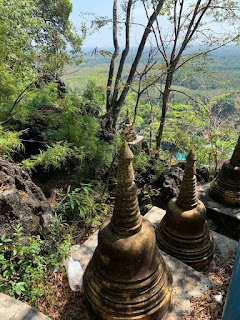 I put self-doubt and negativity aside and began my climb. I conquered about 40 steps and started panting pretty hard. My heart was beating fast. This incline was no joke.

I sent my friend ahead. She was a former athlete and a much better physical specimen than I, who prefers to meditate, write and chill all zen like on my patio with my chai. I lost her from site around steps 200, where I think I stopped for the third time.

Along the route the numbers are scribed on the railings so you know just how far you've gone. People coming down the mountain give encouragement to keep going. And people coming up behind you either stop and enjoy the break with you - or pass you by with a smile. But make no mistake about it - everyone is sweating and breathing hard.

As I sat down again around step 300 I said, not even to myself but out loud, "I can't do it." Immediately I was appalled at myself. How could I be so negative so early on! I still had 900 some steps to go. I was not even a third or a fourth of the way up. I sat on the steep steps in the full sun panting hard. I wanted to turn back and go down, but I also wanted to make it to the summit. My brain wanted one thing and my heart the other. I began to slow down my breath and think positively. And I began to get angry.

This went on and on and on along the climb. Each time I sat down, I would tell myself I couldn't make it and that it was too difficult. Then, each time I would get up and climb some more.

And then there are the monkeys - the little rascals that like to steel your water bottles, hats and sunglasses. You know, the items that you really need for the climb.

Eventually I ran into two girls from Latvia. One of them was terrified of the monkeys and unable to move past a certain point. I sat down near them and we talked. I told them I wasn't afraid of the monkeys and would go up with them, but I had to stop a lot. They liked the part of the plan where I went up first, but wanted to get right past the monkeys. Something about helping them get past the little buggers inspired me to keep moving. For several hundred steps we went a bit together, stopped and rest, then went a bit more. One of the girls lost her water bottle to one of the primates. I told her to keep it close to her body and not wave it around, but it was too late. They're quick little beings and he grabbed her bottle and a tug of war ensued. Finally, she relinquished and he ran off. Other monkeys were equally enjoying potato chips and other goodies that they had won in this area. I saw two different sets of monkeys having sex on the railings, watching us walk by and some scream at people. They were quite vicious at times, but I didn't care about that at all. I put the monkeys out of my mind and focused on the arduous climb and how I would never ever ever make it to the top...and then go up a little more.

The girls left me at some point. I was about an hour in to the climb and around step 900 or something - it is difficult to tell because towards the top the numbers stop being so visible. Its almost as if the guy painting them on said, "who cares, not many people are going to see them anyway."

Into the thousands the railing itself began to rust away and at times you could not even use it to brace yourself, which I had been doing to actually pull myself up with my arms, as to give my legs a break. More fucks and can'ts.

A little further and people started to tell me that I was almost there - it was very close. Funny thing is that at that trajectory you can't tell how close or how far you actually are. Until I saw something...I saw the sign. I still had to stop about 20 steps below it and wait. I had gotten good at pausing, waiting, and breaking. I had gotten really good at telling myself that I would never make it that when I actually did - I could hardly believe it. 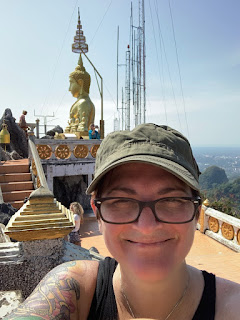 Here I am. Proof that I did it - no photoshop! That smile is real too and well-deserved. The view is absolutely breathtaking - no doubt about it.

My friend had been up there for a bit. It had taken her 45 minutes. It had taken me an hour and 15 minutes. But I had made it. And yet, it was not lost on me that I still had to go back down, an event that everyone said would take about another 45 minutes. Although, I think I made it in 35.

Going down there were no more cannots. I encouraged others who were struggling to go up and wanting to know how much further. I told those sitting down to take their time, the Buddha wasn't going anywhere. And even those pesky monkeys weren't around on the way down! Interesting.

I wondered as I strolled down the mountain if I had made my climb more difficult on myself with all the negative talk. Whenever I tried the positive thinking, I only felt bad about myself and wanted to cry, halting the process entirely. It felt totally unachievable and impossible. Yet when I allowed myself to feel the shadow emotions of fear and failure, and go through the process of feeling those very real things instead of forcing myself not to and focus on the positive, it worked...for me. 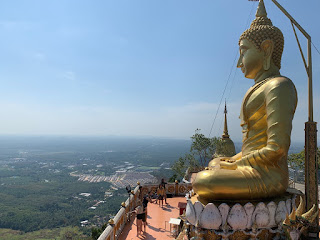 I am sure that I am not the only person in the world who is wired this way. If I had studied psychology I could probably name what it is. Go ahead and feel free to. It doesn't matter. I only understand that sometimes there is a place for acknowledging negative or shadow or self-sabotaging energies. Call it what you want, but bringing the dark into the light and owning it can be a powerful tool for transformation.

Once I finished the climb and our driver picked us up he admitted that he had done the ascent...once. And he said he was sore for two days after.

Back at our hotel the woman at the reception desk said she had taken the climb...once. And was sore for a whole week and couldn't walk for a couple of days.

This was my second day in Krabi Province and I still had a week left of vacation. I didn't want to waste it being debilitated, so I booked a two-hour Thai massage and let her beat my sore muscles up a little more. Actually, I think I fell asleep at some point during the massage. But, it worked. The next day I didn't feel a thing, really. I think I felt like my muscles had worked, but I was not crippled or sore. 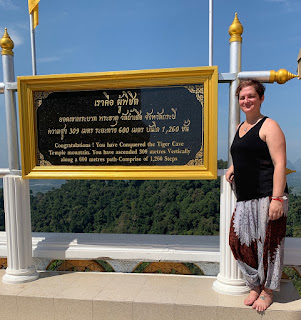 Does positive thinking make the experience of suffering easier? Some would say, yes. Others would also say that there is much healing to come from being in the suffering too.

I am not denouncing positive thinking. I am merely acknowledging that sometimes it just doesn't work. It cannot magically transform a situation. It may change the way I look at something when the suffering I am experiencing is of my own making. But, when a true agonizing experience is occurring, why not acknowledge that this brutal thing that is happening right at this moment, feels bad? And then allow yourself to feel the bad stuff. 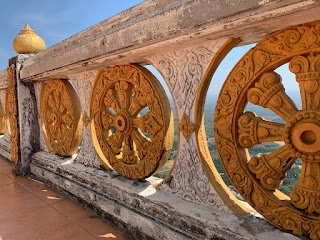 In this particular situation, doing that helped me rise above it. I also understand the feeling of wallowing in a pitiful situation too long. That's obviously not good either.

The Buddha also teaches the Middle Way. or moderation. I like this. So, say the fucks and the can'ts and feel the hurt and the pain, and then get off your ass, pull up your big girl panties, and get going.

That speaks to me.
It just feels real, like all of my life experiences.

With the Internet giving the feel of the world being a much smaller place these days; many people are looking to travel to places that may have been previously thought of as being too far away. And with the increased interest in all things wellness, yoga retreats are making a big mark on the travel industry.

Many yoga studios are now conducting their own yoga retreats both locally as well as internationally. There are facilities now all over the world that conduct all or most of their business as yoga retreat locales. These areas offer yoga rooms with a view and often times healthy meals to boot. These retreats allow you to immerse into your yoga practice in a beautiful location with other yogis and yoginis. When you return, you feel like a new person and have had a rich experience.

But what if you don’t practice yoga or haven’t in a long time? Or, suppose your spouse, friend or significant other doesn’t do yoga?  Well, then you might think that a yoga retreat doesn’t fit the bill. Or does it?

“When I conduct yoga retreats, I like to teach people that yoga is more than just body-oriented exercises. Yes many people practice yoga in that way, but yoga is a practice of self-realization through many paths, of which the postures are one component,” says Tracey L. Ulshafer, owner of Sacred Journeys Retreats by One Yoga Center.

Ulshafer continues, “On a typical retreat with me, we may have an optional morning or evening yoga practice - an all level based class that even those with minor injuries will be able to partake in with adjustments. Afterwards we have breakfast and then go about our day’s activities. Each day I try to explore the main attractions as well as the spiritual side of an area with people. This may include a guided meditation or mindfulness practice at a location or even a discussion on the spiritual philosophy. With the international retreats there is also always a selfless service or karma yoga practice where we give back to the locale that we are visiting.”

Interested in attending a yoga retreat with heart? Contact Tracey Ulshafer at One Yoga & Wellness Center, located at 156 South Main Street in Hightstown, NJ or check out the yoga retreat page at www.oneyogacenter.netor www.sacredjourneysretreats.com
Posted by Tracey L. Ulshafer at 1:00 AM No comments: